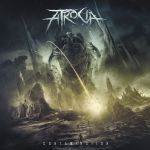 Formed back in 2003 this is the third album from this French band. They define their style as old school Death Metal, based on the American bands, but with touches of Thrash and bits of Grind. The American style is without a doubt present all the time, with maybe CANNIBAL CORPSE and IMMOLATION being strong influences. Their Thrash edge sometimes reminds of bands like MALEVOLENT CREATION, but there is also a lot of breaks and more elaborate riffs not far from GORGUTS. The Grind influence is quite back in their sound or probably no longer an important part as I can hear just a few bits of it. While they do have a very good production, avoiding the plastic drum sound and the overproduced guitars, there are a few things that, at least for me, they could do a bit better. The vocals are quite monotonous here, as there is little to no variation to them, always a low grunt that at this point borders like an absurd brutality. And then there’s the way the songs are constructed. The band cannot decide if they are a thrashing Death Metal band or if they are a technical brutal Death Metal band. The flow of all the songs, after a few listenings, was like one long song… until ‘Curse Of The Two-Headed Queen Cobra’ sets in… proving that yes, the band is able to create killer songs, not drifting away from their style, but using arrangements in a more straight forward way, adding some twisted dark melody and with a monstrous main riff, that would make Trey Azagthoth envy for not creating them. Even the vocals sound with more variety here. So maybe time will tell if the band is able to come up with songs in that vein. I went to check out their earlier efforts and believe me, they are more in line with that song, so in this case evolution has not been really good. Also it makes me realize that a vocalist can sometimes enhance or be in detriment of the overall sound of the band as their first album, with a different vocalist, and the one previous to this, with the same vocalist as the new one, they used more variety in the growls and sound a lot better. And they work better being more straight forward with more use of the aggressive Thrash and drift away from the more brutal ways. www.facebook.com/atrociaofficial, www.facebook.com/greatdanerecords