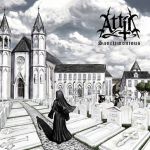 I have to admit that the recent comeback of classic Metal nearly completely passed me by until now. Of course I have heard one or another album and especially checked out new stuff from old heroes, like the DENNER / SHERMAN album or the fantastic latest IRON MAIDEN album. But as far as those highly praised new acts like NIGHT DEMON, for example, are concerned, I didn’t show really that much interest. Thus I haven’t heard much more from ATTIC than the band name yet. I only knew that they were compared with MERCYFUL FATE, a real strong burden, since they are one of my all time Metal gods. But after listening to ATTIC’s second album “Sanctimonious” for the first time, I am damn sure that I must have missed something huge before. The intro ‘Iudicium Dei’ paves the way for the title track that just blew me away! Of course MERCYFUL FATE are present in the whole song, but that alone naturally is one of the greatest compliments possible. And this compliment does not only come from the incredible vocals of Meister Cagliostro, who reaches the same spheres as the King. His vocals wouldn’t be worth a dime without these unbelievable musicians. Any tone they play breathes pure fuckin’ Metal, with all the things I love about the classical interpretation of the genre. The guitars are fantastic, be they riffing, playing harmony lines or solos. And the enormously variable rhythm section is the cream of the crop. Outrageous! It’s ‘Sanctimonious’ alone that is worth getting the whole album, since this is songwriting in best MERCYFUL FATE tradition that gets combined with some moments of DISSECTION and hints on finest U.S. Metal. But, believe it or not, after that opener, ATTIC come along with a song that is just even more fantastic. Old school Heavy Metal can’t be played any better than ATTIC do on ‘A Serpent In The Pulpit’! Those dark haunting choirs drive me insane! It’s not a big wonder that ‘Penalized’ didn’t kill me in a way alike. Yet, this one is still a fantastic tune in finest pre – Speed U.S. Metal tradition. ‘Sinless’ is another great song the King would be proud of and I know bazillions of bands who would kill to write a song like this. Next we have the sinister epic ‘Die Engelmacherin’ that is guaranteed to give you the creeps. And after the interlude ‘A Quest For Blood’, ATTIC deliver another unbelievable song with ‘The Hound Of Heaven’, that knows to combine catchiness and horror in a perfect manner. With the semi balladic ‘Dark Hosanna’, the German five piece presents a song that just made my flesh crawl and thus created their own Melissa’ – the guitars are pure emotion! With ‘Born From Sin’ we have a counterpoint with some Black Metal influences and a lot of speed. The final epic ‘There Is No God’ summarizes the album in all its variety and kills with great guitars in MAIDEN style. This song is also the conclusion of the lyrical concept of the album that tells the creepy story of a nun, who first loses her unborn child and finally her belief. I’ll spare the details here, since I’m pretty sure that anybody who’s into traditional Metal will get his copy of this fantastic must-have album. To me, “Sanctimonious” is the best new traditional Metal album I heard in this millennium. Further info can be found at: www.facebook.com/atticfuneral or www.van-records.de