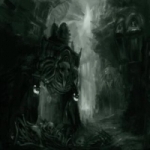 Information says they were formed as a Thrash Metal band back in 2008 in the cold Canada. Then again, after 6 years they release their debut album, and that Thrash Metal sound, while still somewhat present, has given place to a technical form of blackened Death Metal. Some of the sound reminds of early MORBID ANGEL, early ATROCITY some DEICIDE and I can sense a slight SACRIFICE sound in there. The guitar playing is above average and the band feels more comfortable playing in a grinding-fast way, they actually do it better whilst in upper mid-tempo stages. As with many Metal bands that introduce technical elements in their sound that is something one must listen a few times to get into the idea, as at times it seems that it breaks the cadence of a song. If they could keep it up like the pace set by a song like ‘Bloodborne Conspiracy’ where the band shows their full potential, the album will probably be more powerful in all aspects. Great cover artwork which shows a quite mythic feeling to match the title. www.facebook.com/pages/auroch/169070739808?ref=search, www.hellthrasher.com