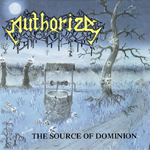 The name AUTHORIZE probably does not ring a bell in anybody’s mind. And why? Well, this Swedish band didn’t come from the epicentres of the Death Metal explosion of the early 1990s, but from the community of Söderhamn in the middle of nowhere. And their only album wasn’t released through a big company, but by the French underground devotees Putrefaction. So AUTHORIZE were at the wrong place at the right time, if you want to put it like this. “The Source Of Dominion”, released in 1991, is an album that would now be one of those albums that anybody knows and remembers if it just came out on a bigger label. That’s why it’s time to give AUTHORIZE a more than honourable mention and a proper re-release for all those who don’t know yet. This five piece recorded some fine songs that just confirm the common prejudice that any Swedish Death Metal record from that era was at least damn good. After the a bit too long spooky intro, the drum roll and the first notes of ‘Silent Nocturnal Symphony’ already hit the nail on the head. AUTHORIZE delivered us listeners well balanced Metal of Death, mainly midpaced and with a certain groove that was based in the Thrash Metal of the 1980s. Thus AUTHORIZE remind a little bit of bands like MORGOTH or even ASPHYX. But be sure that they never forgot to add those melodies and harmonies that were typical for Swedish bands of the Golden Age. This mix still works out very well and is a joy for anybody who is as much devoted to classic Death Metal as yours truly. That’s why “The Source Of Dominion” turns out to be a grower, studded with highlights like ‘Broken Hypnosis’ (refined by brilliant keyboard effects), the basically slow-paced ‘Subconscious Nightmare’ or the riff orgy ‘Within The Obscurity Of Tormention’ (sic!). The song that best combined all the trademarks of this album and thus shows best what’s to expect from “The Source Of Dominion” is the fantastic ‘Infanticide’ – just check it out! And if you like what you hear, this album is a sure choice. The recent new edition on Dark Symphonies features some bonus as well. First, we find the songs from the demo “Darkest Age” that the band released in 1990 under their old moniker MORBID FEAR. These recordings are far more rooted in Thrash Metal than the album, even though ‘Broken Hypnosis’, ‘Darkest Age’ and ‘Mindless Confusion’ can be found on “The Source Of Dominion” as well. But the album versions don’t just sound better, they were also re-arranged for more brutality and more diversification. The final extra on this re-release is a rare recording from a 4-way split 7” EP on Opinionate! Records, where AUTHORIZE performed ‘Darkest Age’ again, in a rougher version than the one on the album. So, the bonus tracks are pretty negligible, except for historical reasons or for the sake of completion. But the original recordings of “The Source Of Dominion” alone are worth getting this discography CD. Check: www.darksymphonies.com