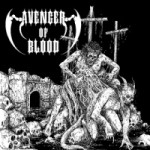 After Las Vegas Thrashers AVENGER OF BLOOD had got their 2nd studio album out, titled "Death Brigade", on Heavy Artillery Records in 2008, the band started suffering from some serious line-up problems, resulting in the departure of 3 band members. It took about 3 years to get this relentless Thrash monster back on its feet again – and in September 2012 AVENGER OF BLOOD were ready to show their sharp claws by self-releasing their new 3-song EP "Spawn Of Evil", just proving on all of us how to make some viciously brutal, punishing – and first and foremost, sinfully catchy Thrash Metal again. Having 3 new guys hired for the band’s new line-up (R.A. Carnage on vocals, Brandon Gulling on guitar and Jeremy Hamilton on bass), AVENGER OF BLOOD step forward as just the same familiar blood-frenzied beast we have known them earlier, hungry and ready for a new hunt again. All the 3 new guys seem to sit well as a part of AVENGER OF BLOOD’s new line-up, liking understanding right off the bat what are their roles in this very frenzied and furious sounding Thrash Metal unit. Looks like AVENGER OF BLOOD have also managed to switch on a completely new, aggressive gear in their old machine: they are now out there not only to kill once but kill twice. All 3 new songs represent 100% pure brutal and neck-snapping Thrash Metal, without any fuckin’ compromises – and if the end of the world is meant to come whilst such songs as ‘Centuries Of Hell’ and ‘Spawn Of Evil’ are nicely paving the way for it, oh dear hell I am more than ready for it. More about AVENGER OF BLOOD, at: www.avengerofblood.bandcamp.com