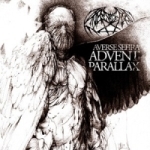 I didn’t expect these three guys to release a new album so fast, or maybe three years are enough, but they needed quite some more time to release the previous one, which was in fact a good thing because I didn’t like their two first works that much and then "Tetragrammatical Astygmata" blew me away with really inspired Black / Death Metal, without so much evident influences and a lot of raw energy, even if their music is much more complex and powerful that the typical raw Black Metal stuff. "Advent Parallax" is released on Candlelight Records, which is a good thing for the band, and furthermore it didn’t have any bad impact on their music. The energy is still here, and I think it is even harder, a fucking tornado of brutality since the very first seconds of this recording. On the eight songs and fifty eight minutes of "Advent Parallax" there are very few moments for breathing, just take a listen to it and admire how the melodies and highly northern influenced riffs march upon the brutal drumming of The Carcass (yes, this is the name of their drummer). Maybe one of the things I like the most is their rawness, compared with other Black / Death bands which have the tendency to go into more modern sounds; AVERSE SEFIRA just take the darkness and brutality of the first IMMORTAL stuff, for example, and mix it with some heavier Death Metal, which results a great combination. And maybe this is what they did since their beginnings, but the songwriting here is much more inspired; even if the songs are pretty long (from five to nine minutes) and totally in your face, the riffs are interesting and you can find some details and magick in every track, and if they stop for a mid paced part it is really because it is needed. If you want to feel how a horde of barbarians marches upon you, destroying everything on its way, put "Advent Parallax" at full volume into your CD player and let them blow your brain. www.candlelightrecords.co.uk