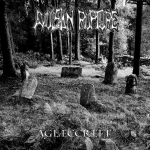 Just a few months ago, the resurrected English Black Metal band AVULSION RUPTURE released their comeback EP “Blasphemous Resurrection” in digital form. The now one man project did a quite unexpected re-start, since they were a real underground act when they were around for the first time, and I mean the real underground. Paul Bobrucki, the original guitarist of AVULSION RUPTURE, has a serious interest in keeping the band alive now, so he recorded “Áglæccræft”, the first album of the band pretty soon afterwards. It’s still just Paul and his drum machine that I already criticized in my review on “Blasphemous Resurrection”. The drum sound once more is very unnatural in too many moments, thus partly spoiling this otherwise very cool album. Again the songs are very short, on point and simple – raw Black Metal for all those who dig albums like “Transilvanian Hunger”. Yes, this legendary DARKTHRONE album might serve as a good reputation here, since “Áglæccræft” has the same purity in the production, an understatement in sound, a return to the roots paired with a charming raw primitivity. Fortunately, the raw production and the a little bit chaotic, guitar focused mix put the drum computer in the rear quite often. Concerning these circumstances, it’s no wonder that “Áglæccræft” sounds more helter-skelter than the EP, without forgetting the diversification in speed and rhythm that made the EP very interesting. The only major change I recognized is the short cut of Death Metal elements, which might be a result of the production as well. Nevertheless I can’t help the feeling that “Áglæccræft” was some kind of quick shot, not in concern of the sound and the production that fit to the sound of AVULSION RUPTURE very well. It is more the fact that a lot of songs or parts sound a little bit unfinished and might have become more powerful and clutching to leave a deeper impact. And, not to forget, there still is this damn drum machine. But those Black Metal lunatics who won’t mind this flaw should go to www.facebook.com/avulsionrupturemetal or http://avulsionrupture.bandcamp.com