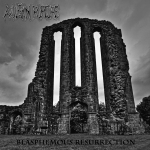 Let’s start talking about short lived bands: AVULSION RUPTURE from Nottinghamshire, UK, were around in the beginning of the new millennium. In the two years of their existence, they only released a demo CD, just 110 copies of that disc were made. Usually, a band like this will be cursed to drown in the seas of oblivion – unless you are Paul Bobrucki. He was the guitar player of the original incarnation of AVULSION RUPTURE and restarted the band this year as a one man band, up to now. So, this means that Paul has done everything by himself. Well, not exactly everything… The drum duties were taken over by a machine, which leads us to the biggest problem this “Blasphemous Resurrection” suffers from: the clinical and unnatural drum sound. Therefore it’s sometimes hard to enjoy the five rather short and straight Black Metal songs that sometimes take a turn towards Death Metal. But if you put that aside, songs like the quite chaotic curtain fire ‘Nebulae’ are very promising. ‘Ziggurat Of Blasphemy’ strikes nearly the same path, while the other three tracks are a little more diversified, with midtempo parts and some more harmonic moments as well. Taking into concern that these five tracks were made within a rather short period of time, I think that there are greater things to come from AVULSION RUPTURE in the not so distant future. But for the next black sign of life, I hope that Paul will recruit a real drummer to his lines. Until that day, check the band out and go to: www.facebook.com/pages/avulsion-rupture/857403067627359 or avulsionrupture.bandcamp.com