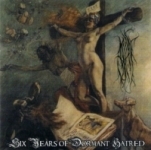 Holy Fuck! This is one of the heaviest discs I’ve ever heard! AYAT claims to be the first “Anti-Islamic Black Metal Band” according to their page on www.metal-archives.com. While racism is unacceptable in any form, they hail from the unlikely country of Lebanon where this band is clearly a minority to the majority Muslim population so that it makes it somewhat okay, I guess. Plus, it’s hard to take a band’s supposed politics seriously with song titles such as ‘Collective Suicide In The Boudoir (Feeling Wonderful Tonight)’ and ‘Puking Under Radiant Moonlight (Followed By A Century Long Ejaculation)’ and a singer known as Filthy Fuck. Though very little else is known about them, it looks like they’ve had numerous EPs and demos going back to 2001. So, this disc was long in the making and it was worth the wait. Their sound is a mixture of Black Metal with heaping doses of Thrash and Hardcore Punk not unlike IMPIETY and IMPALED NAZARENE to name the first bands that come to mind. They don’t have their own website and even their label, Moribund Records, has scant information on them but trust me, if you like your Metal fast, heavy and hilariously offensive, I doubt you’ll be disappointed. www.moribundcult.com