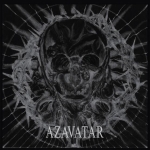 With AZAVATAR, we have one more solo project, in this case the one of Azavatar, who teamed up with three other musicians active in the underground scene of Munich. The musical direction seems to be clear just by reading the title of the opening track ‘Kvlt’. Yet, the classic Black Metal cliché won’t bite here. You’ll also find elements of Doom Metal, progressive music and even some elements of Post Metal in the sound of AZAVATAR. This mix is not very easy to grasp at the first hearing. Just take the opening ‘Kvlt’ as an example. In the opening sequence, AZAVATAR pay their tribute to BLACK SABBATH before the song moves in a cold and black direction, with twists and turns. The guitars of ‘Kaos’ sometimes even have some industrial feeling in their atmosphere. The final three tracks are really long ones, more than ten minutes in length each. So it’s no wonder that they are full of breaks and turns. The musical roller coaster ride ‘Kvrse’ is a post Black Metal song in its character, very dark, yet with enough fast and cold grim parts to be Black Metal as well. On the other hand, ‘Krest’ is a pitch black Doom monolith with some maniacal outbreaks. It’s just the final ‘Krypt’ that comes along a little disjointed, even though some of the slow parts are pretty interesting. For a first sign of black life, AZAVATAR have released a pretty interesting album, and any one into modern Black stuff should check out www.facebook.com/azavatar or the label www.art-of-propaganda.de