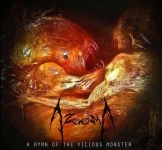 AZOOMA
A Hymn Of The Vicious Monster
(Xtreem Music)
34:11min

Just when you thought you’ve heard it all, there’s the unexpected just around the corner. This time it is AZOOMA, a band from a country you’d never expect to allow any “Western” music, a country run by an ultra religious Islamic regime. Yes, it’s Iran, the city of Mashhad to be more precise, where the four piece started in 2004. It took AZOOMA ten years not only to record and release some songs, but also to evolve into a band that is worth to take more than an eye on. “A Hymn Of The Vicious Monster” is good enough to do without some exotic bonus, since the four long songs (plus each in- and outro) are a kind of progressive Metal even I can easily enjoy. AZOOMA are no copycats, they took their influences from bands like DEATH or even CYNIC as well as from straighter bands to mix them into their own cocktail. And they can also do without a shitload of local folklore, there are just a few moments in the final ‘Chapter IV: Gyrocompass’ and the whole outro ‘Appendix’. Instead, there are even some WATCHTOWEResque moments, a monstrous amount of riffs and a lot of breaks of the unexpected kind that make “A Hymn Of The Vicious Monster” a very enjoyable disc of progressive Death Metal music, with influences of Power Metal and Techno Thrash. So, if you’re digging some more complicated stuff with a style of its own, then AZOOMA should be the good deal for you. Check them out at www.facebook.com/azoomaofficial, www.xtreemmusic.com