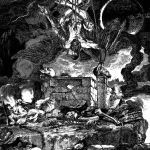 Canada is without a doubt one of my favorite places for Metal, along with Australia and Chile. You see, although killer bands are all over the world, these places seems to be more in for quality than quantity. In this case, a newer band formed in 2017 and with their debut recording, which is some very twisted and morbid Metal of Death of the blackest kind. A great thing here is although the production and sound might remind of some kind of War Metal bands, you will actually find that the riffs have a quite elaborated approach. References to such albums as “Here In After” or “Diabolical Conquest” are to be found here, and they are also conjuring a quite asphyxiating atmosphere in their sound, like feeling some invisible hands of doom choking you until you breath no more. Just four songs and two interludes, but the material here is so strong and executed with such passion (for death and horror) that the future ahead for the band looks… horrendous. Which is good in this case. The songs in here are all about creating an atmosphere of terror and damnation, and they have succeeded. Just remember, there is always a realm of chaos to be brought by unchaining the wolves. www.facebook.com/godzovwar