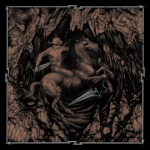 First we had the "Roman Acupuncture" demo which received quie a lot of praise, then the "Aura" EP was released by Iron Bonehead Productions, which made a larger crowd aware of BÖLZER, and that release got even more praise than the demo. The Swiss duo made of HzR and KzR is now ready with their second EP "Soma", that is going to be released on the Irish label Invictus Productions (the vinyl version is already sold out, dammit), an EP that offers a two track attack, that will soothe the wait for the first full length release from the guys, which should be upcoming. Blackened Death Metal with an aura of mysticism and dark ambience is what BÖLZER is putting up front and has made their trademark, and that concept is continueed on this release, though a tad more straight forward and striking compared to "Aura". Though only a tad, as the first track ‘Steppes’ clocks in at 5:34 minutes and the second track at 12:27 minutes, and keeping such a long track straight forward, would perhaps be a bit boring, and BÖLZER is nothing near boring, so we are getting our twists and turns and ups and downs, don’t you worry. ‘Steppes’ is a blow to the skull, a fistful of powerful and energetic mysticism straight into the soul, gripping and catching, mysterious as ever, though also more straight to the point, there are some killer riffs and moments, though overall a strong and catchy tune, when it latches on, and it will quick, and when you find yourself hooked by it, it will not let your soul be free again. The second track ‘Labyrinthian Graves’ is in the classic BÖLZER vein, if such can be stated, with the small amount of music the band so far has released, a track that evolves and evolves yet still runs in circles, with small repetitions of what just happened. The music is smeared in a thick dark and mysterious atmosphere, that paints the track really well, and again a track that is hard not to be drawn into, and the webs are so many, that one gets caught in the midst of the mystery, and the way out, is hard to find, a track that offers so many nuances, that half would have been plenty, but oh please, keep it coming. BÖLZER has on their three releases manifested themselves as masters of building up dark and mesmerizing tunes, that ember with atmosphere and mysticism, with lots of catchiness, intriguing rhythm patters and out of this world mesmerizing vocal work. I didn’t get into "Aura" straight away when it was released, and didn’t really get what many were raving about, though it slowly came, though when I first laid ears on this release I was completely sold from the very intense beginning of ‘Steppes’ until the last tones of the outro of ‘Labyrinthian Graves’. This release is quite a must have from fans of occult mysterious Black / Death Metal, as the layers and atmospheres, and the music it self, just keep on revealing new sides and deeper vortexes where one can get lost inside the dark corners of the mind. Enter the coffin ships at: www.facebook.com/pages/bölzer/108657105834227, www.invictusproductions.net