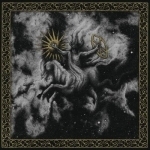 Don’t get turned off by Swiss BÖLZER’s, to put it mildly, rather irritating moniker as it fails to fit optimal to their stunning oppressing Black / Death sound and would have had me thinking of a sludge band or some dull Deutsch Rock like FREI.WILD, SCHMELZOFEN or BRATWURSTBRATEREI if it did not had the Iron Bonehead tag on it. So, relax my friends and let the powerful ambience of “Aura”, the band’s first MLP after the much lauded “Roman Acupuncture” demo 2012 consume you! Consisting of HzR (drums) and KzR (guitars, vocals) – the latter also in WITCHCHRIST, DEATHCULT – the three new tracks ‘CME’ ("Coronal Mass Ejaculation" – can’t say I’d like to know what that means), ‘Entranced By The Wolfshook’, ‘The Great Unifier’ are not just a simple full frontal sonic assault but due to a vicious groove, natural and heavy sound, even a macabre sense for melodies make it a highly interesting release for fiends into GRAVE MIASMA (whose dark guitar tone is present here in spades), VASSAFOR or ALCHEMYST. Faster sections with hackly drum beats are coupled with atmospheric slower passages that do not shy away from incorporating some dissonant chords as well whereas the vocals effortlessly shift from tormented growls to shouts that reek of despair, desolation and contempt. Diverse and captivating are two adjectives perfectly describing BÖLZER’s creations and I can only hope that they will not let us wait too long for a full-length. Rounded off by once again tasteful and impressive artwork by Alexander Brown / BNB, there is not a single reason why to not buy this straight away. Hear it at https://soundcloud.com/bolzer. Order it from www.ironbonehead.de