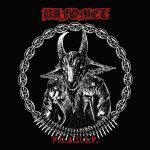 BAFOMET from Japan was formed back in 2015. They play old school Black Thrash with a tingling mix of Speed Metal and till now, their discography mostly consists of demos, split- and live-albums. Initially, the band was known as SIGIL OF BAPHOMET, but changed the name to BAFOMET while recording their first demo “Poison Of Darkness” in 2017. Vladphemer the Sodomizer, who previously had a band in Chile called BATTALION, is the bassist, singer and founding member. Later, Branded Rebel (BRANDED REBEL, MILITARY SHADOW) and Noctisadistum (FRA HEDENSK TID) joined to handle guitar and drums respectively. “F.O.A.D.I.F.” is their first full-length album and the title surely shares the legacy of DARKTHRONE, as the band means F.O.A.D.I.F. as ‘Fuck Off And Die In Fire’. Ode to the name, the first full-length comes up with eight songs including a BARBATOS cover, and serves a spiteful mix of Black Thrash and Heavy Metal. It’s still die hard Black Speed Metal that revives the undying spirit of SABBAT and NIFELHEIM. Branded Rebel’s RUNNING WILD worship melancholy and quirky feeling is all over the place, but the tunes are rich in variety and all the compositions feel like made and played with a lot of passion, perseverance and determination. Also, the band brings variations, as there are songs that sound like Metalpunk possessed by D-Beats. The Japanese handled this crossover intelligently and bring on their influences and past affiliations, like some splits with the Metalpunk band SUICIDE CLUB on cassette, and a 4-way split CD with the Black Metal bands BLACK ABYSS, KRATORNAS and RAPTURE MESSIAH. The production is raw enough and the lyrical contexts of magick, occult, darkness, goat, ritual and war infested well with the atmosphere. The BARBATOS cover will remind anyone of the legacy of the mighty partisans and the band did a great job by evoking them instead of ABIGAIL who gets more nods from Japan from time to time. The CD version has been released by Iron Fist Productions, a long-established Swedish Death Metal label with a limited edition of 500 copies. With all these, this record is recommended for people who like old school street-level Punk, Heavy Metal, Thrash metal and hinges of Black Metal, all mixed to keep the black flame still burning. You will find out more about the band at www.facebook.com/profile.php?id=100063466270309. Iron First Productions can be contacted at: www.facebook.com/ironfistproductions1