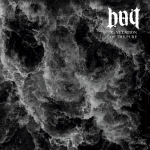 During the last years, the French Les Acteurs De L’Ombre Productions established their reputation as the home of atmospheric and mostly great Black Metal from its native country. Thus their latest signing BAIT is pretty unusual for them, as the band is from Germany and not really a Black Metal band. Instead the three piece from Würzburg is more based in a Post Hardcore and Post Metal surrounding. Until now, they released two EPs on small DIY labels who co-operated for these releases. For their first full length “Revelations Of The Pure”, BAIT are now with Les Acteurs De L’Ombre Productions. And even though this label and the origins of BAIT seem to be an odd pairing at first sight, listening to the first result of their collaboration proves that it fits. “Revelations Of The Pure” is an album that combines influences from atmospheric Black Metal, Postcore, Sludge and some D-Beat Crust. The result is heavy and intense, oppressing and appalling. The guitar builds up a wall of sound that is tight and either harmonic or smiting. Variable drumming from halting to nearly blastbeating grooves and anything in between adds much vigour to the atmosphere. Thus especially the doomy songs like the abyssic ‘Ruin’ or the nerve saw ‘Odium’ are of an intensity that slaughters the soul. In the long run of the album, more and more FALL OF EFRAFA come to mind (‘Forlorn Souls’), mixed with a healthy dose of Sludge (‘Eternal Sleep’). And the more Hardcore influenced songs like ‘Into Misery’ add their part to the unique emotional ride “Revelation Of The Pure” offers. If BAIT continue on their path, they might be among the great acts of Post Black Metal soon. Visit them at www.facebook.com/baitofficial or their label at www.facebook.com/ladloproductions