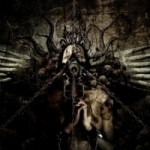 Amazing… I mean, it’s just simply amazing whenever there’s a band crossing your path unexpectedly – and blowing your mind away just like that by that very first impression the kind of bands are able to offer you instantly. Such a band is this Serbian melodic and frenzied sounding Black / Death Metal outfit named BANE, that is – quite sincerely said, pretty fuckin’ awesome. The band’s 2010 9-track debut album, "Chaos, Darkness & Emptiness" (Abyss Records’ digipak version containing of one bonus track, DARK FUNERAL’s ‘The Dawn No More Rises’), hits a few aces on the table right away. What makes BANE such an utter joy to listen to, they bring back the times when especially some certain Swedish Black / Death Metal bands from such labels as No Fashion Records and Wrong Again Records, started this whole new movement in the underground Metal scene back in the day, by adopting more melodic but still sinister and menacing enough elements into their sounds and albums. Bands like DISSECTION, UNANIMATED, NAGLFAR, DARK FUNERAL and perhaps a couple of more, they can all be found from "Chaos, Darkness & Emptiness"; even if only in small portions but still. I would even say that especially the appearance of DISSECTION’s old ghost (the "Storm Of The Light’s Bane" era in specific) is pretty strongly present on this record, which doesn’t work against BANE a bit but more like on the contrary: these Serbian blokes know how to take a full advantage of it – and add some of their own tiny, specific spices into it, to make it all to sound more of their own. "Chaos, Darkness & Emptiness" has been divided into 3 separate chapters, each of which containing of 3 tracks. Tracks like ‘Awakening Of The Evil Spirits’, ‘Lost Shadows’ and ‘Dysthymia’, are not exactly songs but intros, preludes and outros basically, which I don’t really care for that much personally but the remaining 6 songs (or 7 if that DARK FUNERAL cover song can also be counted in) do offer such a pleasing enjoyment in a high caliber, top-notch Black / Death Metal that most likely BANE will get a nice army of loyal followers sooner than they could ever even expect. "Chaos, Darkness & Emptiness" is brilliant – and as I am writing this, there’s some more brilliance coming from them soon: BANE’s follow-up album, "The Acausal Fire" should be out on Abyss Records any day now, so be sure to get it too. To get more information about this strongly gifted Serbian Black / Death Metal outfit, go to: www.baneband.com, label: www.officialabyssrecords.com