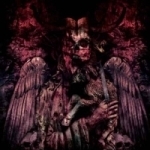 I gotta admit I really did enjoy the heck out of Serbian melodic Black / Death combo’s BANE’s 2010 debut studio album, titled "Chaos, Darkness & Emptiness". These Serbs’ aural assault of DISSECTION-esque and DARK FUNERAL-esque type of Black / Death Metal appealed every nerve cell of mine – and the band’s follow-up record, "The Acausal Fire", did that even more to me. "The Acausal Fire" basically continues right from there where they left off on their – in so many satisfying and chilling ways, debut album "Chaos, Darkness & Emptiness". This time they, however, have refined their sound even more, paying just a bit more attention to each single part of the songs on their follow-up record, how to get them connected to each other as seamlessly as possible. Also, the use of very underlining harmonies and melodies within their songs has increased quite drastically, the guys’ still counting on similar musical approaches that one can find both from DARK FUNERAL’s and especially DISSECTION’s releases. I would claim that the aforementioned two fine Swedish amalgams of well-ripen evilness have still been the strongest musical grounds for BANE when listening to the whole pompous outcome of "The Acausal Fire". Jon Nödveidt’s sharp sense to write some immortal songs, has truly left its mark on BANE, there’s not even a slightest doubt about that. On "The Acausal Fire" you can find an endless road of Jon’s deep scar marks on BANE’s way to make people impressed by their extremely well flowing cavalcade of songs. I don’t mind at all if they do sound like the ultimate torch bearers for DISSECTION’s musical legacy, because as we all know by now DISSECTION is no more. Therefore it’s pretty easy for me to scream from the very top of my lungs ‘Thank dog we have a band like BANE…", following loyally the same glorious path that DISSECTION left behind them when ceased to exist. Hence I don’t wonder a bit either why BANE even chose to cover DISSECTION’s song ‘Night’s Blood’ for this record. At the end of the day it’s not even hard to spit it out loud and clear that "The Acausal Fire" is simply one of the most outstanding Black / Death Metal releases of the recent times you can find in today’s Metal markets. If you don’t believe my shameless praising about this Serbian outfit and especially "The Acausal Fire", then you can always make yourself convinced by checking them out by yourself, right? For further info about BANE, find it all at: www.baneband.com, label: www.officialabyssrecords.com