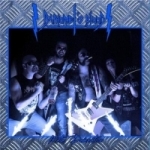 According to Helltrashing fanzine BAPHOMET’S BLOOD are the bastard songs of MOTÖRHEAD, BULLDOZER and VENOM and I like this comparison. The sticker "Speed Metal" stands proud on the top right of the cover which shows a bandphoto including the 4 members in a cliché Metalpose wearing VENOM, SARCOFAGO and MOTÖRHEAD shirts, big sunglasses (no EMPEROR sunglasses, big sunglasses. Remember, big sunglasses = cool band – to quote Fenriz, haha), guitars, cigarettes, a Jim Beam bottle, a power drill and a few mustaches. This Italian 4-piece chose to pose, but should we spit on those, no we thrash with them and with all the rest. RAZOR-fans might understand what I’m talking about… Damn, this here is not for posers, this is for Metalheads in the true sense of the word, and the word is METAL, which – by the way, is featured at least once in each lyric. The music itself is raw Speed Metal with hints of the mentioned bands above and if you like these bands you won’t do yourself any harm to buy this cool record. "Metal Damnation" is BAPHOMET’S BLOOD 3rd eruption and released in a limited gatefold sleeve in co-operation between High-Roller-Records and Iron Bonehead Records. To the owner of Iron Bonehead, Patrick Kramer, the song (guess what?) ‘Iron Bonehead’ is dedicated to. As I said this gatefold LP is limitied to 1000 copies of which those 250 splatter vinyl copies are already sold out and of those 750 black ones are also not that many left as I heard. Available through the mentioned labels or any of the better mailorders around who carry vinyl in their assortment. One thing to add: compact discs are no fun – BAPHOMET’S BLOOD support the stop the madness campaign against the use of compact discs. Join them!! www.hho-records.de