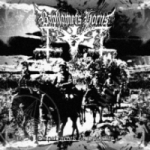 BAPHOMETS HORNS offer no build up or bullshit. They go straight for the jugular vein, then proceed to the ear drum and kick it in with a steel toed boot. Drawing upon what sounds like a variety of influences ranging from the hard gristle of Grindcore, to the percussive madness of CRYPTOPSY, to the speed of MARDUK, and the minimalist structures of BEHERIT, this debut is a tail spin of hostility aimed sqarely at humanity. Appealing, but there are a few drawbacks the chief of them being that the album is a little too focused on velocity. BAPHOMETS HORNS have good riffs, but they’re somtimes hard to distinguish. On the other hand, songs like ‘Satanic War Command’ have clearly audible structures, so this flaw is by no means spread over the entire recording. In fact, this is a fine start. With the positive reactions the band’s demos received, we may yet see more of BAPHOMETS HORNS in the future. www.myspace.com/baphometshorns