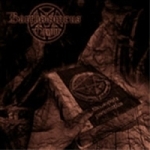 The underground scene in Israel is one of the most neglected scenes I think, even though the country’s small but fine underground movement already puked out several high quality acts in different genres in the past. The infernal horde of BARTHOLOMEUS NIGHT is no exception here and releases with "Theosophia Pneumatica" a first class blasphemous Black Metal album. The band started as a solo project of T.K.O.R but he soon recruited Refahim as vocalist of the now defunct DALMEROT’S KINGDOM (the band released a fine album called "Hamistorin Hanitzchi" back in 1999) and both were later on reinforced by some other warriors from the darkside. This diabolic force has already unleashed a demo tape called "The End Of Time" in 2001 and an EP in 2003 entitled "Survive". Now they strike back with their first full length album. The album is very complex and has a lot of variation. The basic is a blend of Black / Death which seems to be influenced by the Swedish style of this genre due to the excellent dark harmonies and great melody lines. But like I mentioned before BARTHOLOMEUS NIGHT vary their songs and so you can hear a lot of elements like fast, relentless speed eruptions, furious double bass parts, some thrash riffing and various tempo changes. All works quite well and is forged together to a convincing, interesting dark brew and is very well executed with dedication. It’s extreme but not too brutal and leaves enough space for sophistication. Even the use of the synth parts is neither annoying nor disturbing. It supports the mood here perfectly I think. And over all thrones Refahim’s harsh and grim vocals. One of the tracks is sung in Hebrew (‘Adon Habalahot’) and the CD also features a video clip. The presentation / booklet is very well done, total professional. The album was recorded, mixed and mastered in the Selani Studio in Poland which is known for the works with acts like VADER and BEHEMOTH. So you can expect nothing else than a powerful, mindblowing production which leaves nothing to be desired. It even was re-mastered again at Chronic Studio to maximize the quality. The band is currently looking for a label to release their second album and to distribute "Theosophia Pneumatica". It would be a shame if the labels would leave this raw underground diamond unsigned. I can recommend this (in my opinion) strong full length output to Hellbangers who are into quality black art. So get in touch for more infos at www.bn-horde.com and check out this strong album.