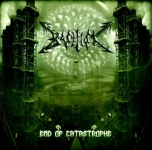 BASILISK, this Japanese Black / Death Metal trio, is a completely new entity to me. However, they have been around since 1997 and released just one 3-track demo titled "狂蛇 (English translation to this is "Ryo-Ja")" in 1991. So it’s really no wonder why the band’s name has slipped away from my radar completely. "End Of Catastrophe", the title of their debut album, is a pretty amazingly well done tour de force of these fellows’ capability to churn out some intense dark and blackened Death Metal that comes right on your skin. Guitarist and vocalist Takayuki Minoshira is convincing as hell with his beast-like grunts, reminding me slightly of Bay Cortez of SADISTIC INTENT – with a hint of Black Metal rasp in his voice, while his other two band mates also do a pretty kick ass job at their own departments, to maintain BASILISK’s crushing Black / Death Metal havoc. BASILISK play a straight forward mixture of both Black and Death Metal, although the main emphasis is clearly on the latter mentioned genre. For example a song like ‘Suffer From Hallucination’ resembles some melodic, dark and eerie moments where DEMIGOD are true genius at (start listening from the 2:28 min mark). Many times the ‘keeping it simple’ recipe works best for bands – and that’s exactly something the BASILISK camp has well realized on their debut too. A lot of potential enjoyment can be found from this disc, so in the end of the day it becomes really easy to recommend BASILISK to the fans of blackened old school Death Metal. More info on BASILISK at: www14.ocn.ne.jp/~basilisk/pag/main.html, label: www.weirdtruth.jp