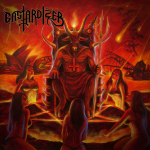 BASTARDIZER started their sonic crusade in 2013, "Enforcers Of Evil" is their debut album, and they play melodic Power Metal with a lot of keyboards. Bullshit: one look at the track listing and we know what to expect: ‘Bathory And Lust’, ‘Pentagram Of Pleasure’ or ‘Bastards, Bullets, Bitches And Beer’ – titles like that don’t suggest we will deal with Hard Rock or Power Metal, right? While the Australians list DARKTHRONE (yep, especially current albums), GOSPEL OF THE HORNS or TOXIC HOLOCAUST as their main influences – what isn’t far from the truth, especially as TOXIC HOLOCAUST frotman Joel Grind mixed this album – we could actually add names such as HELLHAMMER (the riffs!), MIDNIGHT or GEHENNAH here, as the quartet from Sydney throw in a lot of Rock’n’Roll and even some Punk elements to the cauldron. Don’t expect fancy solos or riffs (but let’s be fair: these guys know how to play their instruments!), ear friendly melodies, or any technical stuff: BASTARDIZER is something totally opposite. Straight, simple, dirty, evil and loud. And wet of beer. Hard to guess how old they are, but it wouldn’t be a special surprise if we would find some bastard sons of Lemmy or Cronos in the ranks of this band. Horns up, good stuff, and the Heavy Forces quality: the LP is limited to 500 copies, and is available as black wax (350 copies) or clear wax (limited to 150 copies, incl. free patch). More information: www.facebook.com/bastardizer666 and www.heavy-forces-records.de