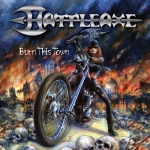 Although BATTLEAXE never became huge, the demand for their music seems big enough nowadays and this reissue provides the answers to both "why didn’t they make it past the mid 80s, like so many other NWOBHM bands?" and "why does this album still have a following to this day?". Well, I guess “because fuck you!” would be a great answer to the question that might pop up first, in the minds of those who are already familiar with this album. That question is “why was the cover artwork replaced with this abomination?!”. The original cover artwork was not a masterpiece, but the primitive, cliché’, awkward painting of a biker with a mullet and an axe couldn’t suit the musical content better. What you get here is an album that actually rocks, full of typical “Heavy Metal anthems”, pretty cheesy, but totally enjoyable. BATTLEAXE were heavily influenced by SAXON, obviously, but the quality of “Burn This Town” is more than a good enough compensation for their lack of originality. The songs here have a genuine Rock’n’Roll spirit carried throughout the album and it can be heard damn clearly. Talking about the sound quality of this album – it’s absolutely great! Every instrument can be heard perfectly and every instrument sounds like itself (even the bass drum!). This reissue also has bonus tracks from a radio session, and if it was really recorded live – then total respect to them, because the execution of these tracks is really topnotch. It’s not surprising that BATTLEAXE never became huge and if find it hard to believe that any other reason but the retro trend made them reunite in recent years, but when all is said and done – “Burn This Town” is a totally solid album. If you like catchy Heavy Metal with a masculine sound – check it out! www.battleaxemetal.com, www.facebook.com/battleaxemetal, www.spv.de

BATTLEAXE - Power From The Universe - by Thomas Meyer