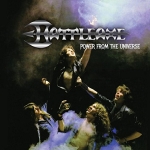 Let’s go back into my youth here. Well, not only just mine, but maybe yours as well. I remember the year 1984, when a 14-year-old kid from a German village came into a well sorted record shop in the big city. As any kid of his age, he didn’t have a lot of money to spend. But this one special record cover stroke the eye of the youngster, who already was deeply into Heavy Metal back then, MAIDEN, PRIEST, SAXON, but also TANK and ANVIL. The cover showed a very chaotic scene with maimed crucified people and the reaper on a horse, trying to impale the spectator. “Metal Hammer” said the title, the back told him that this was a compilation that featured the most important acts of the new generation of Heavy Metal. And the low price was good for a fella with not much pocket money. So he got that record, brought it home and was blown away by bands like MERCYFUL FATE, VENOM, RAVEN or METALLICA. As you already thought, that little fella was me. And you might even thought, what the hell this story has to do with BATTLEAXE? Well, this band from the UK was on that compilation too, and their song ‘Running Out Of Time’ was the least interesting song on “Metal Hammer”, stuffy and oudated, in comparison to all the other exciting new bands here. Years later, I got hold of a sampler called “Metal Battle” that came out a few months prior to “Metal Hammer” and featured partly the same bands. BATTLEAXE were on that record with another song from their debut “Burn This Town” that also was a lowlight on a top-classed compilation. So it was no surprise that, when I heard the whole album a few years ago, it had nothing to offer but solid and very unspectacular NWOBHM stuff. I quickly forgot again about BATTLEAXE and even edited their second album out. Until I got this re-release of “Power From The Universe” on my desk. It took a little time to find the memories on the hard disc of my mind and I even took a listen to the songs from these old comps again, just to be prepared to listen to a 30 year old album I never heard before. And the opener ‘Chopper Attack’ seemed to belie me. A powerful NWOBHM tune with a not too clear and forceful sound. Better than any song from the debut. But sadly, it doesn’t go on like this, since ‘Movin’ Metal Rock’ and ‘License To Rock’ sound as they’re titled: commercial radio Rock tunes, too polished to please, too boring to rock. Here we have the crux of the matter with “Power From The Universe”: BATTLEAXE seemed to look for commercial success with the album. The song that encapsulates band’s dilemma is ‘Fortune Lady’, originally the final song of the A-side. This semi-ballad starts off with some cheesy keyboards, but all of a sudden in the end, BATTLEAXE remembered where they came from and delivered very saucy powerful riffs and guitar leads, just as if they wanted to say: “We still know how to play Metal!”. The flipside of “Power From The Universe” suffers from the same discrepancy: nice Metal tunes like ‘Shout It Out’ or the title track with some clever ideas stand in contrast to a song like the horrible ‘Make It in America’ that was programmatic, yet thankfully failed its aim. So I can just state that this album is more than ambivalent for sure. As it is common use for any proper re-release, we have some bonus material on “Power From The Universe” as well. Four tracks that were recorded for the band’s third album that never saw the light of day. Three of them were already released in 2005 on the “Nightmare Zone” EP and proved that the more radio oriented style of some songs on “Power From The Universe” were not coincidental. ‘Killer Woman’, ‘Radio Thunder’, ‘My Love’s On Fire’ and the up to now unreleased ‘Love Sick Man’ are smoothly polished and catchy, but they didn’t lack power. So, they are a lot better than the cheesy tracks on “Power From The Universe”. Yet, there were bands in those days who did songs like this better. After listening to more of 50 minutes of BATTLEAXE, I still ask myself if it’s worthwhile to re-release any damn record of the 1980s just because it’s the 25th or 30th anniversary of the album. And the more I think about it, the more I know it ain’t… If you’re in a nostalgic mood, you might check: www.battleaxeuk.com, www.facebook.com/battleaxe.nwobhm.official, or: www.spv.de