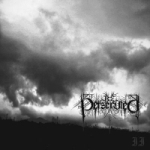 Have you ever heard of a country named China? It’s supposed to be pretty big and thanks to an endless supply of minimum wage workers is said to flood the globalised market with ultra-cheap cloned products, thus reaching Weltherrschaft within a few years. Nothing and nobody seems to be safe, not even the most decadent youth subcultures of the decaying old world. BE PERSECUTED, advertised by their label as "the first Black Metal act from China", are the first encounters of this strange phenomena and if, for example, the quality of Chinese cars is anything similar to the quality of their music then there’s really nothing to be afraid of. To describe the "music" on this pathetic excuse of a record is easy: imagine a 15-year old dissident from Peking, stuck with his (incredibly small) manhood in a horrible noisy vacuum cleaner, screaming at the top of his lung while in the back a sack of rice keeps slowly falling down the stairs, imitating the sound of a badly programmed drum-computer. Once in a while his little sister makes herself heard with some Bontempi-interludes. "Sad Depressive True Chinese Black Metal"! Now seriously, I’d rather sit through an XXL-session of Chinese water torture than having to listen to this just one more time. One of those records that makes you feel ashamed for the fact that you even know of a genre that spawns such grotesque misconceptions of an album. Stop the madness! www.no-colours-records.de