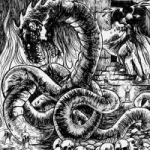 Alberta’s filthy blasphemers in BEGRIME EXEMIOUS have got their 2nd full-length studio album out – an 8-track opus titled "Visions Of The Scourge", on the highly respected US Death Metal label Dark Descent Records. No matter how all too familiar the band’s raw, unpolished and beautifully captivating Black / Death Metal may sound to some of our ears, this stuff just screams for blasphemy. My first, initial impression about them, sort of linked BEGRIME EXEMIOUS musically to such bands as ORDER FROM CHAOS, BESTIAL MOCKERY, AUTOPSY, DARKTHRONE and the likes. I mean, to those infamous hordes that have always enjoyed doing their thing in the nastiest, primitive and most uncompromising way. BEGRIME EXEMIOUS have exactly adopted the type of sound for themselves that most likely will appeal a big number of underground Black / Death Metal fans. BEGRIME EXEMIOUS reek strongly of many of those essential elements of true underground Black / Death Metal that undoubtedly will make them our friends within a short time. The album’s closer song especially, ‘Relic Of Befouled Incantations’, which lasts 15 minutes, is quite an impressive tour de force from these Canadian guys’ abilities to write lengthy songs that have no dull moments whatsoever. The song itself reeks quite a bit of the Californian own goremasters AUTOPSY, the more towards the end this song progress on. The song’s creepy, dark and sludg-ish atmosphere definitely earns high maximum points unreservedly for what the song represents – with all its ill-omened ingredients in it, flagging high for it. "Visions Of The Scourge" contains absolutely no gimmicks, no bullshit, not trendy wanna-be Death Metal but just offering a damn fine plateful of that filthiest and rawest blackened Death Metal in the very truest form. Would you happy to get some? Well, then you should already know what to do next… More at: begrime.orphy.net, label: www.darkdescentrecords.com