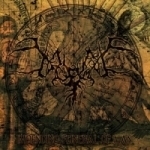 I have taken far too long to complete this review in part due to the lukewarm response I initially had to this album. Nonetheless, I could hear some very striking and powerful elements that compelled to give the album additional listens, and, in time, the value of the work was revealed. On their debut album, “Impending Funeral Of Man”, Canada’s BEGRIME EXEMIOUS are seen expanding their arsenal of sounds beyond that which they utilized on their demo recording. Overall, this album is an ambitious leap forward for the band although their drive to ascend is thwarted along the way by several unfortunate pitfalls. The band plays a sort of hybrid Metal that could best be described as Deathrash, but which is also possessed with a definitive Black Metal character. In this way, BEGRIME EXEMIOUS defy conventional classification. Their music, however, sounds authentic and their devotion to the core conventions of Metal is undeniable. In the contemporary scene, their approach to Metal may be compared to a band such as ARES KINGDOM (and not just because the collage on the inside of the CD features a photo with Chuck Keller and Mike Miller). In much the same way that ARES KINGDOM’s style cuts across every Metal boundary while still sounding authentically Metal, so too does BEGRIME EXEMIOUS coalesce a variety of influences into something unique. The tools employed by BEGRIME EXEMIOUS are not those that erect ornate epics, but those that unearth the deep sewers beneath. The band’s approach is vile and they seem to play most comfortably at an aggressive and moderately fast pace that suggests that the band likely excels in the area of live performance. While the energy of their songwriting is apparent throughout the album, something of it occasionally seems lost at times due to the studio sound. Or perhaps the fast paced nature of the songs simply becomes redundant at a certain point. Indeed, the best songs on the album are those such as ‘Psalmody Of Sacrificial Blaze’ and ‘Ancient Crypts Asunder’ in which the band incorporates a more diverse array of tempos and more intricate arrangements. BEGRIME EXEMIOUS is clearly a band with potential and will likely continue to improve upon the formula they have concocted so far. However, a few things about the album unnecessarily draw the attention away from the meritorious elements that are present. First, the leads often do not enhance the songs, and the disparate sounds between the two different guitars is jarring and distracting at times. In particular, the cleaner guitar channel sounds thoroughly out of place. Also, the artwork leaves much to be desired. The inside panels contain four distinctly different pieces of art from four different artists. Each of these pieces is displayed too small and each would have been a superior cover to the one that was ultimately chosen. Why, when they have four artists creating stylized, original art for their album, would the band instead resort to the Photoshop atrocity that adorns the cover (I bought the CD version of the “Set Ablaze The Kingdom Of Abraham” demo without hearing the band in large part because I was drawn to the simplicity of the artwork)? And, lastly, even though the sampled monologue from “Cobra” did remind me that it has been too long since I have seen that movie, I think it is a poor choice for inclusion here, but that’s a relatively minor point. www.myspace.com/begrimeexemious, www.darkdescent.net

BEGRIME EXEMIOUS - Visions Of The Scourge - by Luxi Lahtinen