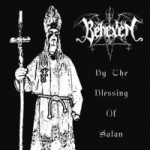 BEHEXEN
By The Blessing Of Satan
(Woodcut Records)
47:27min

At first I thought BEHEXEN was a sort of tribute to the almighty BEHERIT, because of their moniker, their country of origin (Finland) and the primitive black and white cover art evoking the sick art of Chris Moyen. But in fact BEHEXEN reminds more of SETHERIAL music-wise, because of their extreme brutality allied to their sense of the epic and the drama. This band is not a bunch of newcomers by any means since the foundations of BEHEXEN were laid down back in 1994. “By The Blessing Of Satan” is only their second effort, so I guess they crafted their music a lot before unleashing it on us (the first album was released in 1999) a sure sign of consistency and of intellectual honesty. The result is a deluge of blackened sick riffs vomited by the very depths of Hell, an unrelenting aural assault of classic Black Metal, not groundbreaking for sure but still damn convincing. Don’t look for experimentations here as you won’t get any, but keep in mind that more than often better are competence and dedication than foolish attempts to be original for the sake of it. BEHEXEN belong to the handful of bands who maintain the credibility of the Black Metal genre (I think here especially of their country mates HORNA and PEST, and of the Norwegian URGEHAL). “By The Blessing Of Satan” is full of great moments and exhales grandiose and bewitching atmospheres as BEHEXEN don’t rely on samples, keyboards, female voices and other heresies to reach such a result. The vocals come out extremely satisfying, exempt they are of any stupid false mannerisms like duck shrieks, and this five piece show a lot of musical maturity throughout the whole album, combining ultra fast riffing with heavy slow paced passages. The recipe always seems to be the same, but in the case of BEHEXEN, their obvious concern to play Black Metal by the book becomes a force, don’t ask me why and call this simply talent. Anyway, a must have for any serious Black Metal devotee, and be sure that this can’t be said about ninety percent of the so called “true” Black Metal bands who plague the present days scene. A kill! Satan blesses you all!

BEHEXEN - My Soul For His Glory - by Mario Cubero