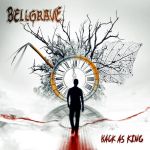 BELLGRAVE
Back As King
(self-financed)
42:37min

Well, well, well my Michelle, BELLGRAVE is back, and not just back! Back as king as they state with the title of their comeback album, and the first album since 2016’s “Panzerherz”. The German band disbanded in 2017, though couldn’t apparently keep their musical endeavors in check, and had to churn it out to us, once again! We can put BELLGRAVE in the Death Metal category, as they are channeling Death’n’Roll our way. Said genre was kicked into the world with the masterpiece “Wolverine Blues” by the legendary ENTOMBED back in 1993, after their two historic Death Metal albums “Left Hand Path” and “Clandestine”. The release of “Wolverine Blues” sparked much turmoil and was by some deemed to be the end of Death Metal, others didn’t listen to ENTOMBED again as they had betrayed their roots – I loved the album from the very beginning! That all written – BELLGRAVE is nowhere near the same league as ENTOMBED. The Germans are delivering chugging grooves, rocking guitar riffing, grooving rhythm patterns, a tad electronics which drags the music towards more commercial interests than the chosen label indicates, melodic hooking pieces and vocal manipulation at times. Talking to the more commercial side of things, and perhaps a younger audience than this old grumpy writer. Just take a track like ‘Enemies At The Ocean’ where BELLGRAVE really tries to build up a grandiose and epic tale, though for me it ends up boring and dragging, as the used elements in the song don’t come together and deliver a punch. At other times the guitars lack power in the delivery, the rhythm patterns lack intensity, and the vocals, even though quite varied, require acquired taste and punch. I really miss some empowering intensity and feel on this album, both musically and production-wise, it becomes 42 minutes of dragging Rock with some Death Metal and Gothic parts, not being tied that well together. There are some good ideas, the lyrical layup is interesting, though I miss the ideas of the lyrics being caught in the music, the weight of the topics isn’t reflected by the music. Well, they can’t all be winners! More info at: www.facebook.com/bellgrave.1