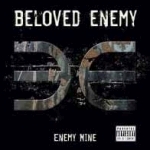 Beloved Enemy is the new band of ex-Fiddlers Green guitarist Peter "Kafka" with the, from tattoo-conventions well-known, singer Ski King. Here under the funny pseudonym "Dead L-vis". The music isn’t unspectacular Goth-Rock with some electronic baubles. I wouldn’t speak from industrial influences like the promo sheet. The second song ‘Virus Undead’ is also the title track of the upcoming horror movie "Virus Undead" in which Ski King can be seen. The songs are all nice rocking with catchy melodies, nice riffing and the excellent singing and voice from Mr. Ski King. The voice is a mixture of Carl McCoy with a touch of Elvis and even perhaps in the ‘The Other Side’ a little bit operatic. In opposition to the normal sad gothic nation you feel the fun the musicians have playing their stuff all rounded up by the powerful production. While listening to the record names like The 69 Eyes, Him and Deathstars come to my mind and so fans of the named bands can grab this blind. Metalheads should risk an ear before. www.myspace.com/belovedenemy666 or www.belovedenemy.com.