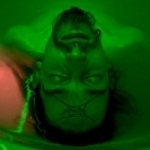 BENT SEA is a new Grindcore band featuring Devin Townsend of STRAPPING YOUNG LAD, Sven de Caluwe, vocalist of ABORTED, and Dirk Verbeuren, drummer for Sweden’s SOILWORK. With such experienced musicians in the line-up, it comes as no surprise that the music of BENT SEA should reflect their expertise in Metal. A quick glance at the “bowel-churners” listed in the liner notes and it all becomes clearer: NAPALM DEATH, EXTREME NOISE TERROR, TERRORIZER, CARCASS, UNSEEN TERROR, ROTTEN SOUND – the members of BENT SEA, in addition to hailing from the old scene, remain adherents to it, and it is this firmly drawn allegiance to the old that makes this EP so great. ‘Noistalgia’, first song and title track, rips open the floodgates with furious D-beat brutality and manic hardcore vocal styling. The general theme of viciousness in the drumming never wanes, bringing to mind the sonic punishment of BRUTAL TRUTH and the short, but potent early songs of NAPALM DEATH, as demonstrated on track 3, ‘Blast Beat Barrage’ – a brief, but very much to the point, song. Contemporary socio-political issues such as corporate greed and digitization serve to theme the EP lyrically. It just wouldn’t be the same Grind without protest. Talking of protest, BENT SEA does in music what other bands might do in interviews, and that is mock the new generation of bands who use three-to-four word phrases as names. “Phrases make great band names”, it says in the liner notes beside ‘In One Word’, a sarcastic attack on terrible bands like AS I LAY DYING, and JOB FOR A COWBOY. A few breakdowns interrupt the speeding drums, lending some variety to songs like ‘Tripwire Target’ and ‘Grind Control’, but before things slow down too much, ‘Sustained Idiocy’ and ‘Dead Meat’ vault the listener back to breakneck TERRORIZER-style velocity. ‘Dead Meat’ contains an exquisite guitar solo, and as this EP draws to a close, I think it is the overall absence of great solos such as the one on ‘Dead Meat’ that bothers me – but really it’s the only thing that bothers me about this release and it’s not such a big deal in the long run because everything else required to make a great band is there: songwriting, technical ability, and motivation. Last but not least, BENT SEA cover ‘Bullshit Propaganda’, a classic EXTREME NOISE TERROR song. Is it as good as the original? No, but what cover can boast to that? This EP is worth every penny. Excellent stuff. www.bentsea.com, www.dirkverbeuren.com