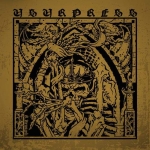 After less than a year of silence (more or less) after their first full length "Trenches Of The Netherworld", Swedens D-Beat Deathheads USURPRESS show another sign of life in the form of a split release with Belgium based Grinders BENT SEA. But USURPRESS are out for a surprise here, exploring new horizons with their longest song ever. ‘A Tidal Wave Of Fire’ is more than seven minutes long and consists of three parts. Besides the expected D-Beats, we also find elements of Doom and Sludge, especially in the middle part. This one needs getting used to it, before it unfolds his power and might. Additionally to USURPRESS first exploration in progressive Crust, we find ‘City Of The Nomads’ that sounds much more like the USURPRESS we know. Which means, it’s a straight D-Beat smasher, but due to the production of these recordings, this one also has a certain edge of Sludge in it. On the other side of this split release, there are no less than eight songs by BENT SEA, seeking quite a contrast. This trio consists of SOILWORK’s Belgian drummer Dirk Verbeuren, who also plays guitar here, ABORTED vocalist Sven de Caulwé and the always very active Shane Embury from NAPALM DEATH. So we have a pretty high profiled line-up that fuels some expectations. And those expectations aren’t belied, since this trio offers modern Grindcore with as much range as the genre allows. And that’s more than you might expect from Grindcore. Somehow I was reminded of bands like LENG TCH’E or the defunct CLINGING TO THE TREES OF A FOREST FIRE, as far as exploring the borders of Grind in particular and the extreme in common are concerned. But BENT SEA surely know how to cook their own soup, giving the term "Grind" their own special note. As the old saying goes: "Shane Embury only plays in great bands" – it’s once more true here. From my point of view it’s very fine to know that, aside from the CD on Selfmadegod, there also will be a 10" vinyl version of this gem on Doomentia. Aficionados of the extreme and the unusual find some fine stuff at: www.doomentia.com. You can check the bands at: www.usurpress.com, www.facebook.com/usurpress or www.bentsea.com