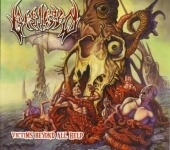 Wow… what a highly explosive package of Thrash Metal (with a hint of proto Death Metal) has arrived to my location. BESIEGED, this Winnipeg based trio that was formed back in 2003 already, tried to get their 9-track debut album called "Visions Of Pain", released on a small Dichotic label but unfortunately it was never released. "Victims Beyond All Help", is these Canadians’ 2nd album, that they originally self-released as a pro-quality CD-R in small quantities (300 copies of this was ever pressed in digipaks only) – and hence it’s really wonderful to see this getting released officially on factory-pressed CD on Unspeakable Axe Records; a sub-label of Dark Descent Records. What makes things a bit sweeter for all of us, BESIEGED plays the kind of fast, violent, frantic and ripping Thrash Metal that such cornerstone albums of Thrash Metal as "Beneath The Remains" by SEPULTURA, "Spectrum Of Death" by MORBID SAINT or "Tortured Existence" by DEMOLITION HAMMER, once offered to the whole world. Those 3 aforementioned albums in question come to mind first when spinning "Victims Beyond All Help" over and over and over again. Guitarist and vocalist Nolan Smit must be Max Cavalara’s younger Canadian cousin because of his vocal patterns and guitar work that more than just occasionally come very close to Max’s early days in SEPULTURA. There’s absolutely a nice texture in BESIEGED’s fast, brutal and heavily riff-based Thrash Metal sound that becomes somewhat irresistible the more you get your teeth sunk into this band. The band’s hatred-oozing and acrid Thrash Metal is very attractive on all accounts really. They sound like an unstoppable Thrash force on "Victims…", rollin’ viciously over and mangling all of us to dust. BESIEGED have all the strings in their own hands basically to become one of those Thrash Metal acts in today’s world that people want to follow what’s going on in their camp. So let’s hope they will get all the needed promotion they are absolutely entitled to. Truly pretty fuckin’ awesome they are really. BESIEGED: www.facebook.com/besiegedthrash, label: www.facebook.com/unspeakableaxerecords