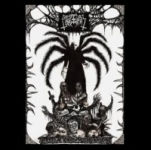 Switzerland’s BESTIAL TORMENT’s (R.I.P. 2000 – 2005) new release is a slab of blackened Thrash with a Punk influence. A compilation CD of over 60 minutes that includes the "Terror From Below" EP, some unreleased studio tracks, live recordings, and rehearsal material. The artwork on the cover has that HELLHAMMER-style of old school cover. The cover alone should give you a vibe of what to expect style-wise. I will start with the first three tracks which make up the "Terror From Below" EP. The first track ‘Moribound’ is an ok track, nothing special, the opening guitar riff sounds much like old CELTIC FROST. From the start the production is rather on the unpolished side / underground / DIY, which is not bad but it does not do justice to drums for one. The vocals are a mix of your typical blackened Death vocals with highs and lows. ‘Cemetary Screams’ is a better jam that I instantly liked. Mid tempo with some pretty cool guitar riffs. This is the song that I think should have opened the album. ‘Chainsaw Resurrection’ is a fast paced, no blast beats, but a thrashy jam that reminds me of some early DARKTHRONE ("A Blaze In The Northern Sky" – era). Not your typical Black Metal riffs, but then again nowadays the typical Black Metal riff tends to morph on a weekly basis. Tracks 4 – 8 are the some of the unreleased tracks from 2002. This part of the album starts off with the Thrash-brewed track ‘Incubator Of Hell’, but ends rather too quick. Just when you start getting into the song, it ends. The rest of the tracks are well written jams, but border on being stagnant and repetitious. The production takes a major dip on track 6 ‘Crown Of Sulphur’ which is a shame because this track had potential. Tracks 9 – 13 are the live tracks recorded in 2004 that I believe are from the "Celebration Of Damnation" live album. Now we get to hear how the band does in a live setting. The opening track for the live stuff is ‘Crown Of Sulphur’ which is a great track to open up a live recording. Once again the production is on the DIY side and does sound like it was recorded with a boombox, but hey that’s what we get in the underground and you get to hear the crowd getting into the music. Last at bat on this album are tracks 14 – 18 which were recorded in 2000. These must be off of either the "Miasma" or "The Dawn Of The Zombie" demos. The rough production sounds like a demo and really grasped my attention. Raw to the Black Metal core this was my favorite part of the album. The only two tracks that do not make another appearance on the previous portion of the album are ‘A Night Of Bestial Torment’ and ‘Terror From Below’ both of which are awesome tracks. Overall the album is decent, a bit more on the run-of-the-mill Black Thrash, but worth a listen. You get a good anthology of BESTIAL TORMENT’S work throughout the years and a feel that these guys were not out to reinvent the wheel, but to thrash it out for the underground. For more info: http://apokalyptron.blogspot.com, http://deathfiendproductions.bandcamp.com