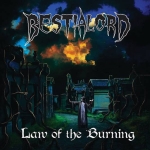 Hailing from Wichita, Kansas, BESTIALORD are a Death / Doom band that actually reminds me more of blackened Death Metal outfit SATHANAS than anything else, albeit with a tamer, less aggressive, less chaotic sound. And though first full-length "Law Of The Burning" doesn’t necessarily offer anything new to the genre, it does seem to manifest itself nicely into a solid album. The album opener ‘The Doom That Came’ begins with a monstrous roar deep in the bowels of the caverns before mid-tempo guitars and drums gently boil and burble, releasing a steady blackened Death track which, as mentioned earlier, reminds me of a more relaxed SATHANAS. ‘Vermin’ creeps and crawls its way into another mid-paced song with chugging guitars halfway through and hoarse vocals by Mark Anderson. The third track ‘All Fall Down’ is introduced by an acoustic guitar before breaking into guitars that feel like they were written in the murky depths of the filthiest swamp, with a little stoner, SABBATHy feel layered inbetween it all. ‘Law Of The Burning’ is a somewhat faster-paced track that stomps and barrels its way through the masses. ‘Marduk Kurios’ is one of the better tracks that changes from mid-tempo fist-pumping to galloping rhythms sure to get you on your feet. You almost feel the Cenobites chomping at the bit to rip your soul apart as ‘I Am Pain’ references Pinhead and Hellraiser in blood-drenched abundance. The seventh track ‘Loathed Be Thy Name’ is a similar offering not unlike the other songs on the album. Again, there’s not much diversity on "Law Of The Burning", but what IS there is a solidity and consistency that glues it all together. ‘Above The Vaulted Sky’ carries on the not upbeat and not yet slow theme with the album. ‘What Is The End’ wraps it up in a doomy, plodding beast wandering around lurking in the shadows. BESTIALORD have a chance to work their way into the Metal masses if they can gain a little more of their own sound and uniqueness which would eliminate them from comparisons to other bands in the genre. Their first album is a decent, solid delivery with room to grow on. For more information, check out www.facebook.com/bestialord-1353079071382901, www.satanath.com/sodp