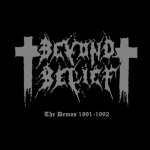 Another fine trip into the past is granted currently by Terror From Hell Records, who have resurrected the two demos of disbanded Dutch horde BEYOND BELIEF. The compilation starts with their 1992 demo "Stranded" which brought them the deal with Shark Records back then, who released their first album "Towards The Diabolical Experiment", for which three of the for songs from "Stranded" have been used. After the obligatory intro, the opening track ‘Godforsaken’ slowly crawls out of the boxes and takes the listener on an evil and dark journey into slow Doom / Death. The guitars are slow and heavy with slow and intense drumming and combined with the deep grunts of mastermind A. J. von Drenth the guys really created a dark and menacing atmosphere. ‘Stranded’ continues on the left hand path and their style can be described as an evil version of early CATHEDRAL mixed with the evil energy of ASPHYX. ‘Silent Are The Holy’ and ‘Prophetic Countdown’ are also really good tracks and even though these are old demo tracks, they are really enjoyable to listen to even after 25 years and the careful remastering for this CD release really makes those demo versions quite enjoyable. The second half of the CD goes back in time to 1991 to their first rough demo "Remind The Skull". Those tracks are already indicating the direction, the band followed later on but in a far more rough format with more Death Metal in it. Anyway, tracks like ‘Shapes Of Sorrow’ or ‘Remind The Skull’ also have their charm nowadays and make this output worth to have for all underground lunatics and collectors. For those who have missed BEYOND BELIEF back in the 90s, no problem. Their two albums have been currently re-released by Hammerheart Records and together with the demos now by Terror From Hell, all their material can be purchased nowadays for reasonable prices. For more information, check out the following sites: www.facebook.com/beyondbeliefdoom, www.tfhrecords.com