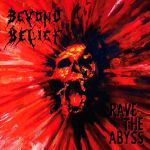 Dutch Doom / Death Metal horde BEYOND BELIEF released their second full-length album “Rave The Abyss” back in 1995. Together with CELESTIAL SEASON and PHLEBOTOMIZED, the guys were the strongest force in Death / Doom in the Netherlands back in the mid 90s. The follow-up to their debut “Towards The Diabolical Experiment” showed a huge development into a more melodic direction. The guitar sound turned out more melodic with touches of Gothic Death Metal in the vein of old ANATHEMA, CEMETARY or old PARADISE LOST and even the vocals turned into a more Heavy Metal direction like PARADISE LOST did on “Icon”. Somewhere between their old direction and the new influences, the eight tracks turned out pretty good and songs like the title track ‘Rave The Abyss’ or ‘Blood Beach’ really had huge potential and showed their fine songwriting skills. Similar to their mentioned Dutch colleagues, their sound was also not weepy and the new direction paired with their massive doomed guitar walls really made “Rave The Abyss” a good album with one of the coolest artworks back in the days. Unfortunately the release came in a time, where also Gothic Death Metal had its peak and too many bands flooded the market with mid-class releases and also their label support from Shark Records was limited, even though they advertised the album in the best possible way. After several spins again to write this review, I still enjoy this album a lot, even though it was somehow a bridge between their old sound and something new. It would have been interesting to know, what direction they would have taken after “Rave The Abyss” but unfortunately the band disbanded some time later. Anyway the material is still worth to check and luckily Hammerheart Records took care of it and re-released both albums for reasonable prices. For more information, please check out the following sites: www.facebook.com/beyondbeliefdoom, www.hammerheart.com