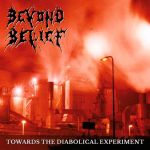 BEYOND BELIEF
Towards The Diabolical Experiment
(Hammerheart Records)
60:56min

Death / Doom Metallers BEYOND BELIEF’s 1993 debut album “Towards The Diabolical Experiment” has received new life via Hammerheart Records. They released 2 albums and 3 demos before calling it a day. In 2004 the band reformed with a new line-up and recently had their demos reissued via Terror From Hell Records. While they have been an obscure underground act, they still managed to pump out some decent music. The reissue comes with a bonus track ‘God Forsaken’ (taken from the 1992 demo "Stranded") which I think is a nice touch for the reissue. Personally it would have been nice if the reissue had included the full demo but again you can grab the demo collection from Terror From Hell. The slow dirge of the album kicks into gear on track 2 ‘Shapes Of Sorrow’. You get a BLACK SABBATH meets the guitar work of early ENTOMBED sound on this jam. The production on this album is solid considering it was the early 90s when it was recorded and shows the music has aged well in time. The guitars provide the downtrodden ambiance as the guttural vocals carry the hymn. The instrumental track ‘The Experiment’ offers a unique touch to this release and in addition provides a nice segway to a track that really captures the ear i.e. track 5 ‘The Nameless’, the guitar solos along with the song structure. This track was very reminiscent of TIAMAT’s “Wild Honey” and speaks to the soul at times as it is one of my favorite tracks on this album. The other song that really caught my attention was ‘The Finishing Touch’, it lives up to its name as it showcases the best of what the band offers on the album and sets things up for the outro. The reissue comes in CD, vinyl and digital format so this should make any fan happy. Being my first time checking this album out I enjoyed it quite a bit. Overall this is a solid album for you Death / Doom / Funeral Doom enthusiasts and an album that has not aged in style considering the 24+ years that have passed since its release. A definite one to check out if you get the chance. It will be interesting to see what the new line-up will bring to the table and if they will continue in the same vain. For more info: www.facebook.com/beyondbeliefdoom, www.hammerheart.com