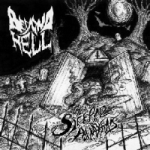 When I am faced with American Death Metal, most of the time they are really Metalcore or juts frog-noise ultra deep, blast beats “ION” something bands which becomes extreme boring or crap after a few listening. Very few bands are able to caught my attention, due to the limited view of their style, and while I am always looking for a good clone, than a crap original band, there is always a limit… enter this USA trio with members involved in other bands like DECREPITAPH and ENCOFFINATION… this debut album, to start with, is nothing I was expecting. It is firmly rooted in brutal American death metal, but this more akin to DEATH from the “Leprosy” era with touches of ASPHYX and a really great lead guitar work. The vocals are probably the most generic part of the music as they are one-dimensional in approach, but still a lot better than the common frog-noise growls of many other bands of similar style. As stated before, and by references to their main influences, this Death Metal is played mainly in a mid-tempo effect, with a few fast parts here and there and the slower ones that gives this a heavier approach. More than once I can feel the old school feeling this band is trying to recapture as songs like ‘Apocalyptic Dreams’ are great headbanging fest, with simple, yet direct riffs that keep in your head after the slaughter is done. This edition also contains the EP “… And Evil Crept Through” which is the same old school style. The recording in both cases is quite heavy, with strong guitars and a good rhythmic section, which goes mainly in a mid-tempo to doomy passages and then speed up a bit for keeping the interest awake. For those craving for the sound of DEATH achieved in “Leprosy” or “Spiritual Healing” this is the exact recipe for pain and decadence. For all further info check out www.myspace.com/beyondhellmusic, www.darkdescent.net, www.skeletonplaguerecords.com