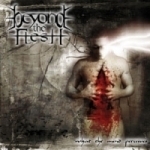 BEYOND THE FLESH
What The Mind Perceives
(Escapi Music)
45:37min

BEYOND THE FLESH are the best example that European influences are really the current thing in the endless league of newcomers from the States. This New Jersey based four piece has a deep passion for the melodic Gothenburg Death / Thrash as well as a good love for Death Metal God Chuck Schuldiner plus a passion for more brutal US style Death tunes, too. And here comes the problem that many new bands have on their debut: BEYOND THE FLESH try to mix too much under one banner of Death Metal. For example ‘The Sick’ has more of a first row DYING FETUS touch, which is quite irritating compared to the melodical opening tracks on the album, but I guess that the band summons some different phases of their evolution on “What The Mind Perceives” and still has to make a proper decision where they would like to go. Imagine a furious mix of DEATH, DYING FETUS, ARCH ENEMY, older Gothenburg sounds and aggressive Thrash in the DEW-SCENTED way to have the range of BEYOND THE FLESH. In terms of the songwriting this band is already doing really well. The drummer is brilliant and his style reminds me pretty much of Florida legend Richard Christy. Surely the band still has to find a real own path, but compared to many coming-out-of-nowhere debut albums this band is doing much better. Soundwise I miss a bit more power and heaviness, but the first impression is rather positive for a debut and it’s good to see that there are still new American bands that are more METAL instead of CORE!!! Keep an eye on that band and check the homepage for some samples!!! www.beyondtheflesh.net