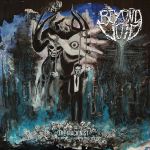 BEYOND THE VOID
The Machinist
(Great Dane Records)
39:37min

BEYOND THE VOID is a technical Death Metal band, formed in France in 2018, that is presenting their debut album. They claim to be influenced by old school Death Metal, and by the sound of the band that is true if we are talking about later DEATH, IMMOLATION, GORGUTS and similar bands. The musicianship is without doubt very good, special detail to the rhythm section, but the guitar players have quite interesting work, especially when both are doing different things. The production values are very good, everything sounds quite organic and not over produced, and the riffs are strong and clear. Yes, if you are a fan of the style, you will appreciate this a lot, but after a few listenings some minor details come to mind that at least for me can be improved. First, the vocals. Ok, Death Metal is not exactly a realm where there is much variety when talking about vocals, but you see sometimes a good growler could make a difference between sounding extreme and sounding just brutal. In this case, I am afraid this sounds brutal, yet it adds nothing to the music and sometimes I can even say it takes away from the great musicianship. Don’t get me wrong, they are not the worst vocals ever, but at times they do sound very one dimensional. That is where vocalists like Tardy, Schuldiner, Van Drunen or Sataniac give their bands a very unique touch and although doing gutturals, you can somehow make it out they are doing something to make it different. Otherwise it sounds like a run of the mill brutal Death / Slam core band and it is not what the music says. And the other is the drum sound, while not bad I think that the snare is a bit weird. Again, minor details but if taken care I am sure that it can rise to better heights. As it is, this offers a lot, the compositions are fantastic, and the music is not that technical that you lose the chain of things. Just the vocals could be better and I’m sure it will enhance everything. www.facebook.com/beyondthevoidmetal, www.facebook.com/greatdanerecords

Julián “The Shadow In My Mind” Núñez

Julián “The Shadow In My Mind” Núñez