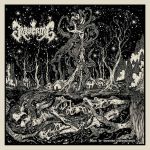 BEZWERING from the Netherlands is another horde, which was unknown to me so far. Formed in 2018 out of the ashes of WEDERGANGER, they released one demo before they got signed by Ván Records. The opener ‘Vredeloos’ starts very slow but already shows that these guys are far away from being rookies. The material sounds very matured but offers traditional Black Metal with an note of Post Black Metal. Good guitar work and drumming makes it easy to get into the album. ‘Nagezeten’ continues with increased speed. Somewhere between DARKTHRONE and modern bands like SCHAMMASCH, the band found their own niche. The drumming is perfect and the vocals vary from spoken passages, choral chants to grim caws. Especially the band from Switzerland is a good comparison as this seems to be the third wave of Black Metal which spreads out to the underground nowadays. ‘Rouwstoet’ has a folky AMORPHIS vibe and reminds me of the Dutch horde FLUISTERAARS. Especially the Dutch vocals are really enjoyable and unique and the slow tempo fits wonderful to the instrumentation and the bridge back into Black Metal is really well effected. ‘Uitgeteerd’ starts grim and cold with freezing nordic melodies, very fine audible bass-lines and cool Dutch vocals. It is really good to hear Black Metal in its new interpretation and with a modern painting. ‘ Aan Gene Zijde’ has twin vocals with the classic caws and the choral clear male vocals, while the instrumenation is pretty classic before ‘Geen Bloemen Op Mijn Graf’ shows the highlight of the album as the guitars are really memorable and the vocals of this track are the best on this album. ‘Waanzinskolk’ closes the album with a gloomy atmosphere, fast drumming and guitars and a disturbing atmosphere. One again Ván Records proved their good taste and that the underground in the Netherlands is more active than ever. For more info, check them out via one of the following sources: www.facebook.com/bezwering-552636585162467, www.van-records.de