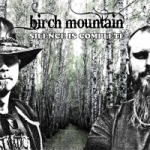 BIRCH MOUNTAIN is a re-awakened Swedish Death Metal project featuring ex-members of such names as EXCRETION, STIGMATA, MALFEITOR, EXHUMED, MORPHEUS, MASTICATION, EXCRUCIATE, BLOOD MORTIZED and EGYPT. Basically we are talking about two members here: Janne Rudberg Björkenfjäll and Mattias Parkkila who are BIRCH MOUNTAIN. I’m not really sure how the 2 handle the whole stuff, but Janne seems to be some kind of multi-instrumentalist handling all the instruments and I guess that Mattias is taking care of the vocals. Hope I got it right, Mattias? What you get is Death Metal, or as the band itself calls it: Heavy Weight Metal Of Death. And that is this time not your traditional old school type of Death Metal which you get here. We are not talking about one of those new bands paying tribute to AUTOPSY, REPUGNANT, DISMEMBER, ENTOMBED, GRAVE or whatsoever. It’s also no grinding blasting technical Death Metal monster with gurgling vocals. BIRCH MOUNTAIN are hard to compare with any other band. The annoying thing is that I only can compare this band to another band’s recording which hasn’t been, as far as I know, released officially so far. I’m talking about the "Love" album from LAME (a successor of the Swedish band LEUKEMIA). "Silence Is Complete" sounds a little bit comparable to this recording, though Janne told me that he’s not aware of LAME’s release and, yes, I can believe that. So a comparison like this sucks, but what the hell? We are talking about a release which is officially available as free download. My advice to all you readers out there is to download "Silence Is Complete" and decide for yourself if this music appeals to you or not. Nothing illegal, nothing unofficial here. BIRCH MOUNTAIN sound fresh and new in this scene and I’m convinced that this release will soon get re-released from a regular record company as the quality here is simply too high to share for free. The free download is a good idea, as Janne said "… we have no plans nor the time to hunt for a label at this time. We’ll see if something turns up. We prefer spending our time doing the music and decided to publish it instead of just having it for ourselves. Hopefully someone else digs the songs as well." Yes, someone does, man!!! Check out www.myspace.com/birchmountain for further details around this project.