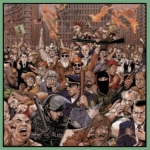 Some of you readers here are maybe too young to remember the times when Hardcore bands like D.R.I. or C.O.C. added some Heavy Metal, especially Thrash to their sound. When bands like SUICIDAL TENDENCIES were hated by most of the then ignorant Hardcore scene for having Metal in their sound. When Scott and Charlie of ANTHRAX picked up former bass player Dan Lilker and a Hardcore guy named Billy Milano to form S.O.D.. Those pioneering days when Thrash Metal and Hardcore Punk slowly converged to form a special and exciting sound that tore down the borders. It was the mid of the 1980s, I was still a kid in my mid-teens and this new sound totally caught me. It was called Crossover back then and combined the aggression of the Thrash Metal I used to love with the energy of Punk. And those Crossover bands had a political attitude that I somehow missed in Metal. Soon I got more and more into Crossover first and pure Hardcore a little later. But why the fuck do I tell you boring, boring stories of days long past? Because the Texan trio BIRTH A.D. plays exactly this style of music. Crossover the old school way, a little DR. KNOW in the style of shouting, a little early D.R.I. (“Dealing With It” era) combined with some pure Thrash Metal ideas (check the intro of ‘Mission Statement’) – that’s what BIRTH A.D.s first full length “I Blame You” is all about. But as anachronistic as this might sound – I really like this album! It transports all the energy I want from an album like this. No less than 18 songs in not even 37 minutes, straight to your face, prove the truth to the roots of Crossover. Furthermore, I’m damn sure that songs like ‘Cause Problems’ or ‘Popular War’ would have been among my fave anthems in 1987. And as if all this wouldn’t be enough, BIRTH A.D. even chose a very tasty cover tune to finish the album: ‘Blow Up The Embassy’ was originally recorded by THE FEARLESS IRANIANS FROM HELL in 1986. Everything done right, I guess! If you still like your old school Crossover or want to find out about this damn cool genre, check: www.birthad.com, www.facebook.com/causeproblems, or visit the label: www.metalage.sk 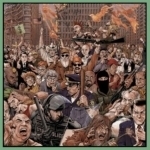 D.R.I., S.O.D., CRUMBSUCKERS, NUCLEAR ASSAULT, SUICIDAL TENDENCIES and SLAYER… these aforementioned six names undoubtedly have a lot in common with this Austin, Texas based trio named BIRTH A.D., who just almost recently got their debut album out on a sub-label of Dark Descent Records, Unspeakable Axe Records. Indeed, this 18-track effort from BIRTH A.D. brings those above mentioned 5 bands to mind, both music wise and lyric wise. Crossover is the name of the game in BIRTH A.D.’s case, and in all honestly I really didn’t expect any band would do that kind of stuff in today’s world anymore. BIRTH A.D. throw all of us back to the mid-fall of 80s on "I Blame You", reminding of all those bands that cheerfully tended to gather Hardcore Punk and Metal fans together for their shows, in the name of unity or whatever really. BIRTH A.D. do a nice job at that department, sounding shamelessly crossover, having a totally Punk-ish attitude and certainly enough metallic ingredients in their uncompromising sound. I’d be lying if I told you this wouldn’t be any fun to listen to because that’s what it exactly is. Plus, lyrically the band’s tongue-in-cheek humor made me cracking many times while spinning this disc in my stereo. Together with a 6-pack of Heineken, your Saturday night simply couldn’t turn out any better. Try this concept together, will ya? www.facebook.com/causeproblems, www.facebook.com/unspeakableaxerecords