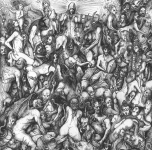 Ohio’s infamous trio BLACK BLOOD STIGMATA, formed in 2002, has tried to get their debut album released for the past couple of years, but due to some unfortunate and unpredictable setbacks coming nearly constantly on their way, it seemed to take an eternity to get their debut full-length released eventually. "Deviant Deities And Perverse Prophets", as the title goes for this, is a 9-track effort and containing more than 1 hour of material from them. Musically BLACK BLOOD STIGMATA sail on a pretty vicious and dark waters of Black Metal, but there’s even a few poisonous drops of Death Metal mixed with their anti-christian attempts for the musical world domination: much thanks to the split vocals that are shared between two members of the band: Jason is responsible for death growls and Troy for Black Metal snarls and screams. It comes very clear soon that BLACK BLOOD STIGMATA have put lotsa their energies and efforts into the songs. As a trio, they have done a lot actually when it comes down to the wholeness of this debut album of theirs. There’s lots of keyboards used within this record that manage to bring in some vital depth and melodies into the songs that truly give a whole new dimension for them to stand out better, than without the keyboard’s presence at all (check out a song called ‘Sharia Bullshit’; how an awesomely spine-chilling fucker of a song is that really!?). BLACK BLOOD STIGMATA have also succeeded in combining Black and Death Metal pretty nicely together on this record, simply using some of those key components cleverly that many of us crave for our daily dose of extreme sounding Metal: well-crafted and captivating riffs that pierce through your mind and soul, magnetic melodies, all-crushing heaviness – and first and foremost songs’ ability to produce many kinds of feelings in us that eventually make us like some certain release when we get a chance to hear something worth our time. And that’s where BLACK BLOOD STIGMATA have also succeeded with on their debut album in my opinion. The only (hopefully constructive) criticism comes from the actual length on this particular record: 1 hour of this type of extreme Metal is a bit too much to swallow just at one take – and I believe if they had cut down their material from an hour to optimal 40-45 minutes only, the album would have worked slightly better as a tighter package. But do keep in mind this is just my opinion – and my opinion only. Besides opinions are like assholes: we all have one – and they all stink, some worse than some others. Nevertheless, "Deviant Deities And Perverse Prophet" is still worth checking out just if a highly anti-christian, Christ-mocking and filthy Black and Death Metal is your cup of the blackest coffee. Is it? More about these Ohio’s infamous icon-smashers and grave desecrators can be found at: www.facebook.com/pages/black-blood-stigmata/201936413250296