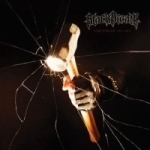 From Seattle, Washington comes this ominous and violent bunch known as BLACK BREATH who released their well received debut album, titled "Heavy Breathing", in 2010. The band’s follow-up record, "Sentenced To Life", follows basically from the same bomb holes where they left off on "Heavy Breathing" – even if they sound even a tad heavier, more vicious and less sort of "Rock’n’Roll-ish" on this new 10-track effort of theirs. As many of you know, BLACK BREATH blend Death Metal with Hardcore and Thrash Metal elements into their own aggressive and totally addictive metallic assault, doing it like no other band has done it as tastefully as they do it, for many years. BLACK BREATH’s obvious Sunlight Studios worship is an integral part of their sound, and it’s no surprising if you have seen them compared to bands like ENTOMBED or DISMEMBER before. The guys’ second album "Sentenced To Life", only adds more of the same dirty smelling, high-octane fuel into the band’s own tanks, in a way to get the band tagged as Seattle’s own ENTOMBED or DISMEMBER – and if someone has ever told you that these fellows’ guitar tone is ridiculously heavy, ripping and crushing, you just have no idea how spot-on this Mr. ‘Someone’ has been. "Sentenced To Life" offers an instant headbanging from the very first moments, rolling over you mercilessly like a dirty dozen of 12-ton battle tanks, generally speaking crushing every single bone in you in a split of second. The album’s true ‘crush-kill-destroy’ value is incredibly high – and if BLACK BREATH were literally able to kill just by the power of their thunderous and violent shit, the top leaders of world’s toughest armies would definitely start fighting over this bunch, just for adding BLACK BREATH to their own war arsenal. These fellows are pretty darn amazing, and I think that’s ’nuff said. More info at: www.blackbreath.com, www.southernlord.com