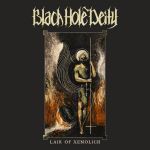 It seems like RAVEN and FEAR FACTORY drummer Mike Heller is not fully stretched with these two bands and about eight to ten other bands and projects. BLACK HOLE DEITY is another band that features his excellent drumming skills. And excellent drumming is needed in a band that plays technically demanding Death Metal like the four piece of experienced Death Metal veterans from Birmingham, Alabama. The EP “Lair Of Xenolich” is the first real recording in nearly two years of the band’s existence, except for two digital singles. And it’s a pretty fine debut recording. From the first seconds, it’s Death Metal rage with breaks and finesse, often on high speed and always on a high level. Sometimes I feel reminded of bands like BLOOD INCANTATION, but it’s also some MORBID ANGEL, early GORGUTS and SUFFOCATION shimmering through every now and then. Yet this is just to give you a hint on what BLACK HOLE DEITY have to offer. Songs like the opening neckbreaker ‘Razed Earth Edict’ or the more groovy ‘Multiverse Incantations’ will satisfy any aficionado of Death Metal with class. And in general, “Lair Of Xenolich” can be seen as the promise of a nice future with fine albums from BLACK HOLE DEITY. Check them out at www.facebook.com/blackholedeity or their label at www.facebook.com/everlastingspew