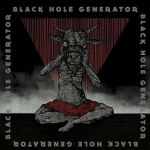 What would you expect from a black hole generator? Maybe the same as me: a device or machine that makes little suns explode in order to produce a black hole that swallows everything in its way. For a layman in physics like me, this is not only a fascinating, but also scaring perception. And what do you as Metal listener expect from a band like BLACK HOLE GENERATOR? Well, I can only speak for me that this name evokes the picture of a Stoner or Sludge Rock or Metal band, maybe with elements of Doom Metal in particular or melancholic music in general. Something maybe fascinating, but not that scaring, I think. The music the Norwegian duo presents on their debut album “A Requiem For Terra” doesn’t really fit these expectations. Instead, Dreggen (formerly in AETERNUS and TAAKE, among others) and Bjørnar Nilsen (also in VULTURE INDUSTRIES) offer us a kind of Progressive Black Metal. So any puristic or trve Black Metal listener is on the wrong way here, but those who are looking for fine dark stuff won’t find that much here as well. So much for the fascinating stuff… Why? Just because most of the time this album comes along quite disjointed, as if pretty nice ideas won’t really work out together and got watered down in the process. Fast and aggressive parts are missing the impact, cleaner and melodic parts tend to be cheesy. Of course this doesn’t count for the whole album, since there are some rays of hope on “A Requiem For Terra”. First there is the opening title track, a doomy and creepy epic with a morbid feeling and furious moments as well. And we find the closing ‘Spiritual Blight’, a quite odd blackened Doom song that musically reminds me of THE GATHERING when their music could still be defined as Metal. But in between these two goodies, there sadly is too much crap to fascinate me. Anyway, if you’re interested, check the band: www.facebook.com/blackholegeneratorofficial, or the label responsible: www.darkessencerecords.no