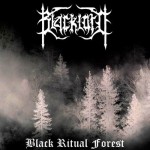 Mexico breeds filthy, putrid Black Metal that gets caught between your teeth and worms its way down your throat eventually. You can always expect a madness, an atmosphere, and a love for Metal. BLACK LORD starts off with a bang after the Intro with ‘Spiritual War’, setting the tempo for the rest of the album. The throbbing rhythms chug along with a triumphant kick in the crotch. ‘Lord Of The Night’ gurgles and spits its way through a muddy, murky bath of acid. ‘Black Bird’ snaps your neck as it wraps its gelatinous coils around you. The galloping ‘Dreaming In The Eternal Force’ inspires pure chaos and mind-numbing destruction. ‘Moonlight’ slows it down a little for about a minute and a half until it too kicks into gear. ‘Sometimes Sacred’ lurches forward at the speed of a thousand raging spirits. By now, you get the idea. If you like your Black Metal loud, filthy and chaotic, BLACK LORD is probably for you. Their debut album "Black Ritual Forest" looks to be a promising start to a hopefully long career in melting our eardrums till they bleed. I raise my horns in the air to salute you, BLACK LORD. For more info, check out www.facebook.com/black-lord-744666732282274, www.tribulacionproductions.com, www.satanath.com